Open Puerto Rico is a project I have been involved with for several years. Funded by the non-profit, Center for Integrity and Public Policy (CIPP), the project was conceived as a bilingual, open-data portal that would address the lack of easily accessible public data from Puerto Rico's government agencies. This work has been of personal interest to me, as I was born in San Juan and spent my childhood on the island.

I joined this project in order to help define the information architecture of the portal and create content - infographics, data visualizations, and motion graphics - both to distribute information about pressing issues and to demonstrate to journalists, academics, students or average citizens what could be done with the datasets we had collected.

In addition to leading the identity design, I personally designed and developed an interactive visualization of key socio-economic indicators (unemployment, per capita income, population, and change in population), showing the state of the island's seventy-eight municipalities from 2000 to 2010. The visualization was built using Mapbox (see below). Mapping the data revealed some interesting findings, such as both the high crime rate in the municipality of Ceiba, and the large negative change in population over the previous decade (-24.3%!). 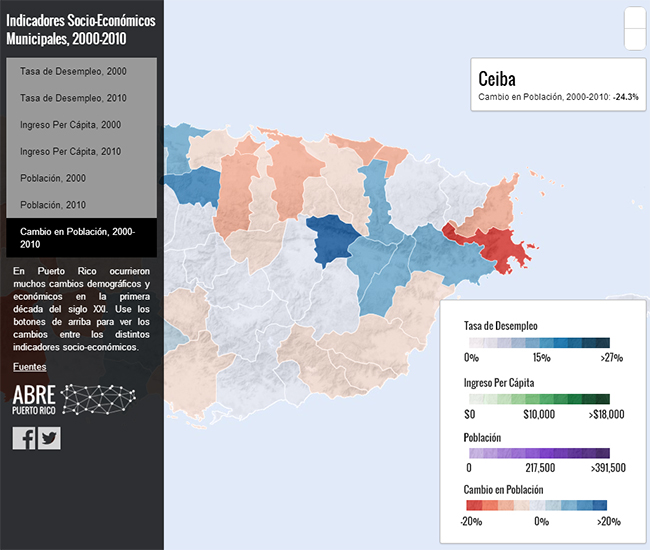 In the interests of fiscal transparency, we also created a tool to navigate forty-five years' worth of budget data, difficult to visualize due to the island's byzantine network of government agencies and departments. I solved this problem by separating the agencies into broad categories, allowing a high-level as well as a granular look at the budget change over time. I built and deployed the final tool in D3.js. 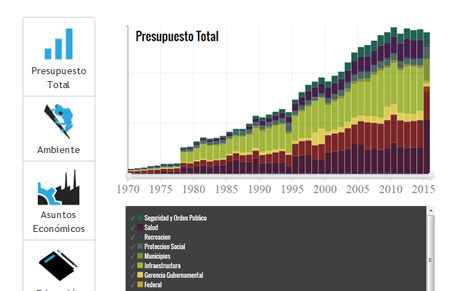 The portal launch was a team effort, and based in part on this work CIPP received a Sunlight Foundation grant to continue their work.

I am currently working on two new projects to support Open Puerto Rico. One is a tool to rate and track middle and high schools on the island (to give parents a better understanding of the state of education in Puerto Rico), and the other is a series of animated visualizations showing the extent of damage and the slow pace of reconstruction following Hurricane Maria (see below).